A landmark New York City restaurant is closing after allegations of repeated sexual harassment by the owner were released. The allegations were reported by 12 women who worked at the Spotted Pig Restaurant. This repeat and pervasive behavior is very significant and indicative of a much more widespread issue.

The New York Attorney General stated that the victims suffered from a pervasive hostile work environment. The victims were effected by multiple acts of workplace sexual harassment, including unwanted physical touching and requests for sexual favors. The restaurant owner also asked the victims to take nude photographs of themselves & share them with other employees. The victims received termination notices in retaliation after reporting the harassment to HR & EEOC. The owner agreed to pay $240,000 dollars in total to the victims. Similarly, the restaurant will provide 20 percent of its profits to the victims, however, the restaurant’s closure may affect this part of the settlement.

As you can see from the statistics above, sexual harassment is pervasive in the restaurant industry. 2/3 of women and half of men surveyed reported that they had been sexually harassed by someone in a position of power at the restaurant. That could be the owner, a manager or supervisor. Furthermore, the study by the Restaurant Opportunities Center (ROC)  found that 1/3 of female employees are harassed by customers on a weekly basis. While most people know it is against the law for employees to be harassed by management or co-workers, it is less common knowledge that employers are also liable if an employee is being harassed by customers or clients and the employer fails to take preventative actions.

Most victims of workplace sexual harassment provocations are unaware of their rights. However, it is crucial that the victims identify harassing behavior and report their situation to HR & management immediately. This quick response will help create the Zero Tolerance workplace environment which we all strive for.

It is important to note that the U.S. Equal Employment Opportunity Commission (EEOC) will not act for simple teasing, however, it will act when harassing acts lead to a hostile work environment.

Sexual harassment in the workplace is very damaging to both the victims and the company itself. Sexual harassment victims often develop stress or depression resulting from their workplace harassment issues, which often creates a very hostile workplace environment. A victim may feel that they have to submit to sexual advancements to advance in their careers (Quid pro Quo). Similarly, the victim might avoid reporting sexual harassment in fear of facing retaliation issues from their manager. This is particularly true if the harasser is in a position of power, ie. The restaurant owner.

Sexual harassment problems are also devastating for the organization. First, it tends to ruin a business’ reputation, which mean less profit, lower morale, and lower customer loyalty. This loss of productivity tends to stem from low employee morale, which frequently happens in a hostile work environment. In short, ending sexual harassment and the culture that surrounds it is in everyone’s job.

Employers in the Big Apple will have another set of anti-harassment laws to incorporate into their policies and training. The New York City Council passed the Stop Sexual Harassment in NYC Act, which covers 11 separate bills and will be one of the strictest anti-sexual-harassment laws in the country.

Among other obligations, the law will require employers with 15 or more workers in the city to conduct annual, interactive sexual-harassment training for all employees—including interns. View the New York State Sexual Harassment Training Requirements in Detail. 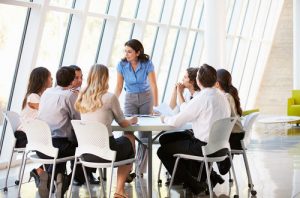 There is a lot of overlap between the state and city laws, but there are some additional obligations for New York City employers, Osipoff said. For example, the training must include information about the importance of bystander intervention to curb workplace harassment.

Managers and supervisors will need to be provided with additional training. “These sessions must cover, at a minimum, the specific responsibilities that supervisory and managerial employees have when it comes to preventing sexual harassment and retaliation, and measures they may take to appropriately address sexual-harassment complaints,” Osipoff said, noting that new hires must be trained within 90 days.

Additionally, employers must keep training records for at least three years, as well as signed acknowledgement forms from the employees who attended.

The act is pending Mayor Bill de Blasio’s signature, but he is expected to approve it.

Follow our social media accounts for the
latest news in Employment Harassment
Training or get in touch directly via phone
or email.

Our Founders, Jill Scala and Dr. Ron Marquardt, have more than 50 years combined experience in the business training industry. Their flagship company, MVP Seminars, is home to over 250 business training professionals and more than 100 keynote topics.